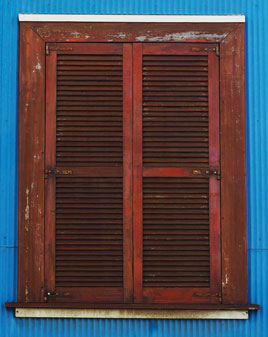 It begins with the voyage of a whaling

ship. Unbeknownst to her crew above,

she was host to a miniscule hole in her hull and a stowaway,

who woke to sodden clothes and the stench of blubber burning.

Midnight glowed—the masts were candles—then blew them out to wish for indigo.

The ship’s name, as she sailed and as she sank, was the Redemption.

It seemed that only Heaven would offer redemption

to sailors’ souls, for the sea refused. All was wailing

and fevered praying that night in the swallowing indigo.

No mermaids came to cradle the sinking princes deposed above.

All was lost of the valued cargo in the frantic burning….

though no ledger had known to account for the stowaway.

became bearer of the title Survivor (a slight redemption

in status). But not until the dawn came burning

over the flotsam was it known, alas: the whaling

ship had given every one to Davy Jones. Above

the wreck floated only a single soul in the rippling indigo.

That first dawn til sunset’s end the sharks made red the indigo.

Sated, they did not crave fresh, trembling stowaway,

splayed upon an oil-smeared remnant of the deck. Above

the buffet the stowaway was captain of the Redemption

(of her remains, anyways) and so shocked by fate’s grace that no wailing

rent the marbled dome. The clouds were left, uncursed, to their burning.

Perhaps it was this thankfulness that spared the raft St. Elmo’s burning

and earned forgiveness of the scarred whale, white against the indigo.

Perhaps Poseidon shushed the sirens in their wailing,

bade the flying fish soar upon the raft, enough to stow away

for a lean day, and sent the rain—sea salt’s redemption.

For despite monsoons and kraken spume the raft bobbed on, safe above.

But even manna grows bland for sated sailors, when above

in vigil. Only the sun knew horizons’ towns, night’s redemption

into day brought only more of the ceaseless indigo.

Wave by wave the anchor in the stowaway

slipped its grip in hope’s rock. A voice joined the sirens’, wailing.

It ends with a stunned glance above at a sea gull wailing.

By day’s end, the burning eyes of the stowaway

harbored in drifters’ redemption—gold and green upthrust amid the gleaming indigo.

1. How to Feel an Earthquake

3. In Exchange for Grilled Cheese & Tomatoes, My Love Requests a Poem

5. Sketches from the Picasso Room

8. Summer in Gaza and New Jersey

9. The Etymology of Prayer

1. How to Feel an Earthquake (prose version)

2. Four Ways of Looking at a Wheel