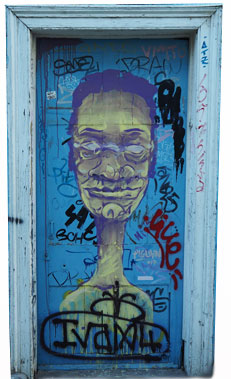 When my brother was born, Mama tells me she thought, How did that come out of me?

An ivory-pink bean with a too-big head and gray eyes wailed in the cradle of her brown arms. She and my father watched the tiny miracle fists, counted the tiny miracle toes and fingernails, stroked the wisps of silky brown hair. Somehow he was hers. She looked from the baby to her husband to herself, and thought, Where’d all of me go?

Who the four of us are we’ll never understand, but during the hazy summertimes of early familyhood I began to piece together clues. Mama tans, Daddy burns. Jordan burns more than he tans, I tan halfway to Mama’s color then break into freckles. After long beach days we’d compare the damage. Daddy would radiate such a red that you winced to look at him; Jordan sometimes followed suit, if he had been stubborn about sunscreen. I would have a dozen new freckles and a golden hue. But Mama: Daddy would look over at her wonderingly and put his hand on the smooth back of her shoulder. “Baby, you just get so dark in the summer, it’s beautiful. You just tan and tan.” And she would demure and say some mother version of Aw shucks, while we all gazed at her beautiful back and arms, neck and pretty legs, warm brown with gold glowing through.

My brother and I did not fully inherit her beautiful skin; in fact, we could be so winter pale that Mama would sometimes be mistaken for our babysitter. She assured us however, that though we did not share her color we had something even finer. “Filipino noses are perfect,” she would say as she dressed us in the mornings. “You have one”ーtouching mine with a graceful fingerー “and you have one.”

We believed her. I carried that conviction throughout elementary school. My fourth-grade crush was half-Filipino, half-white like me, and I admired him for his brains, soccer skills, and perfectly formed nose.

My mother and her never-ending clan of relatives were the only Filipinos I knew until I went to Catholic high school. There I met my best friend while running cross country and track together.  Jessica was Filipina, and all throughout summer training she and our other Filipina friend would bemoan how dark they’d become. We would loll around on the warm astroturf after practice, eating chips and shrimp-flavored puffs. They told me of such bizarre products as whitening soap and bleaching lotion, which you could buy in the Philippines or Asian markets in LA. I had never heard of a such a desire for lightness. To look fully Filipino was my beauty standard—my mother’s sisters were loud goddesses who never hid under long sleeves or umbrellas. It was in the summer, when I was my deepest gold and glowy, that I felt most alive in my skin.

My mother likes to declare that as a woman of color, the only racism she’s received has been from her own people. Fellow immigrants shamed her for being less of a Filipino than they. She lost her Tagalog during the English immersion of immigrating to an almost all-white neighborhood. While their father worked sixteen-hour days at his Filipino grocery store, she and her siblings taught themselves to cook Hamburger Helper and frozen pizza. They wore high-waisted pants and Vans sneakers, and for high school dances the sisters would straighten and curl their long, kinked hair.

I look from her skin to the similar skin of her critics, to the skin of the Filipinos pedestaled in soap operas. The idealized, “Miss Universe” Filipino is porcelain white with a delicate, defined noseーa very distant cousin to the majority, who are brown as coconuts and whose noses disappear without a trace of a bridge. Even in my extended family, where there was never talk of whitening soap, I knew what a “good nose” was: a nose with Spanish architecture, straight and assertive. To be Filipino, perhaps as it is with all colonized peoples, is to be full of conflicted desire. Those who blame the sun for their coloring—rather than credit their genes—turn in the same breath to accuse a Filipino American of denying her heritage.

Who we are we will never understand. My brother has grown so tall that no one knows how he came from either parent. My mother’s face is now flecked with age spots, matching my freckles. My father’s blond hair is dulling into gray. I bring home my tall, blue-eyed boyfriend and my lolo grasps his hands, leans back to look up at him. “You are ehso tall! Eet’s like looking up at heaban!”

My lola, so light-skinned she’s been mistaken for a “chink,” leans over to whisper, “What eh good nose dat boy has.”

1. How to Feel an Earthquake

3. In Exchange for Grilled Cheese & Tomatoes, My Love Requests a Poem

5. Sketches from the Picasso Room

8. Summer in Gaza and New Jersey

9. The Etymology of Prayer

1. How to Feel an Earthquake (prose version)

2. Four Ways of Looking at a Wheel